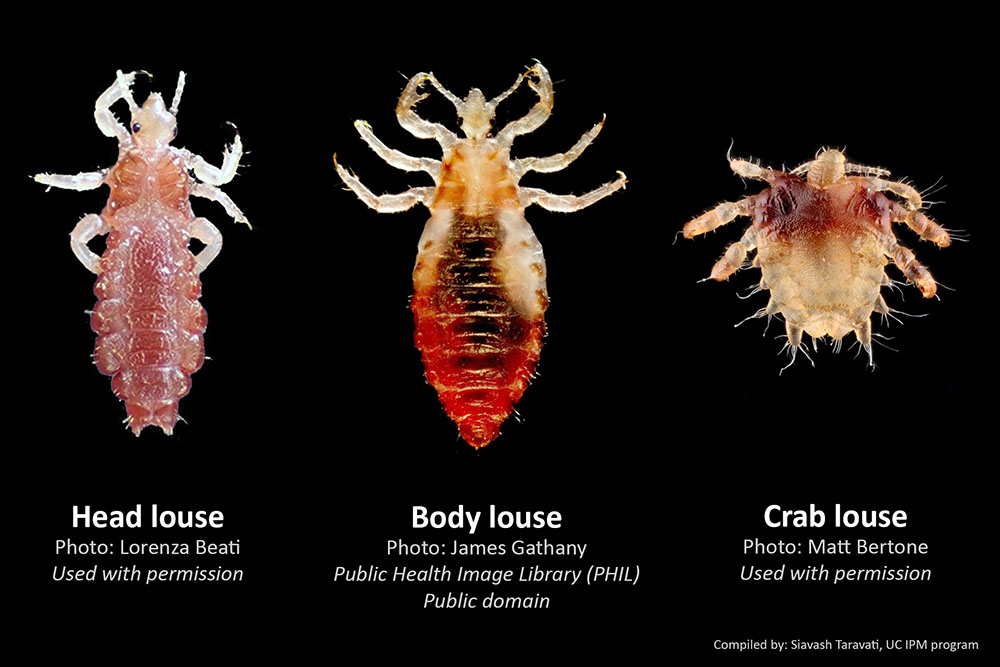 There are three species of lice that exclusively feed on humans: 1) Head louse 2) Body louse 3) crab/pubic louse. Head louse (Pediculus humanus capitis) and body louse (Pediculus humanus humanus) are thought be conspecifics (member of the same species) but crab/pubic louse (Pthirus pubis) is a different species in a separate genus and family. All these species occur in structures and are of public health importance. Use the following description to identify each species.

Have a short and round body (not elongated), with hairy tubercles on abdomen. Front legs smaller and more slender than middle an hind legs (Fig. 1). That was easy, right? They are usually found on pubic hairs but sometimes on other areas of the body such as beard, mustache, eyelashes, and underneath the arms.

Unlike the crab louse, these lice have elongated body (Fig. 1) and lack tubercles on their abdomen. But how you can differentiate between head and body lice? Well, they look very similar since they are members of the same species. So to identify them, you will need to look for more details. Table 1. summarizes some of their morphological and behavioral differences.

My name is Siavash Taravati, an Integrated Pest Management (IPM) Advisor at UC Cooperative Extension (UCCE) in Los Angeles County. I am a member of University of California Statewide IPM program.

My job involves doing research and extension activities on different aspects of structural IPM. I specifically work on structural pests (i.e. any pest that occurs inside or around buildings) such as termites, cockroaches, store product pests, ants, flies, etc.